Almost 220 years ago [this was written in 2009], Greencastle was part of the Parish Badoney (in Gaelic “both Domhnaigh” meaning Church). The name was given to the first Church in the area which was near the present day Badoney Church in the townland of Glenroan in the Glenelly Valley and is said to have been founded by St. Patrick or almost certainly by one of his immediate successors. The patron saint of the parish was St. Aichen. Badoney appears in early papal records. It paid a tax of 2 shillings (2/-) in 1302, the reason for such low tax was because of the “inaccessibility of the parish”. The old parish of Badoney was divided into Upper Badoney (Plumbridge) and Lower Badoney (Greencastle and Gortin) in 1789. Lower Badoney was divided into the present day parishes of Greencastle and Gortin in 1892.

The first Parish Priest in Greencastle was Fr. Nelson. The Lewis Topographical Dictionary of Ireland 1837 gives Lower Badoney as having two Chapels with Rouskey being the Parish Church. The first ordinance survey map of 1834 shows Greencastle Chapel on the same site as today with the graveyard adjoining. In 1847 a school was built beside the chapel which in later years became the hall. A new Primary School was opened not far from the cross roads in 1889.

Oral tradition has it that an earlier chapel was on the opposite side of the road – across from the main gate in the car park area, this site was to be seen up until the present car park was made. It was only a small chapel with no seats, the people of the surrounding area are said to have threshed their corn on this floor.

The first chapel in Broughderg was completed in 1885. Like Greencastle, in its earlier years it had a clay floor and no seats. Daniel Conway gave the ground for the chapel and graveyard and was the first person to be buried there in 1879.

Oral tradition has it the first person buried in Greencastle which I have heard was a wee travelling woman by the surname of “Morris” – without a coffin her body was wrapped in a sheet or blanket.

Prior to the first burial grounds, around the turn of the 19th Century in Rouskey and shortly after in Greencastle, people from this parish were buried in Badoney Graveyard. People went over the mountain by Casàn na gCorp, the funeral pad and coffins were carried by hand spokes the “lengths of a branch”. The outline of some of these paths can be still be traced today. One of over Glenlark Mountain probably used by people from Broughderg and Coneyglen. A stone where they rested the coffin was there up until lately. Previous to this corpses were just wrapped with a sheet or blanket. Sometimes in severe weather, i.e. snow or floods, the corpses were buried in temporary resting places. In some cases they were not moved again. Some of these spots are in the vicinity of the Owenkillew River. 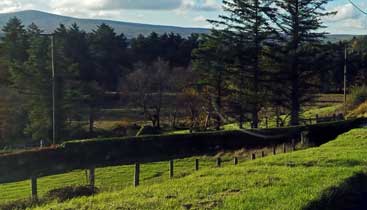 A few men from Binnafreaghan walked part of the old funeral pad from that end of the parish over Rouskey top to Badoney in the summer of 2007.

Greencastle Chapel is in the townland of Sheskinshule. It is not certain how the name Greencastle originated, unlike some townlands here going back over a thousand years e.g. Formil, Greencastle is not an old name or a townland name, nor was there ever a castle in the district. In this statistical survey of Co. Tyrone, John McEvoy mentions Greencastle in this way from Omagh to Cookstown via Gortin in 1802. According to what is handed down there are two versions as to how the name originated. One is that the first Chapel was thatched which grew green. The other version concerns an old woman who lived in a small thatched house in the vicinity of the new football grounds who when replying to someone, said it was her castle and getting a response that it was a “green castle”.

In 1912 the present alter in Greencastle chapel came by train from Dublin to Carrickmore and then taken down in carts to the chapel, a new altar rail and Terrazzo tiles were also included. The work was carried out by workers from Dublin, the money for this came from America, an inscription is on the side of the altar.

Some years later a window was put in the graveyard side of the chapel.

The Stations of the Cross in Greencastle chapel were bought by money gathered in America. It was said that there was only one other chapel in the Derry Diocese along with Greencastle to have the Stations of the Cross in Irish, the parish lies in the heart of what was once an Irish speaking region. The largest in all of Ulster outside of Donegal at the time of the 1911 census.