An Introduction to the Parishes of the Derry Diocese
Thomas Bradley and Finbar J. Madden (1995) 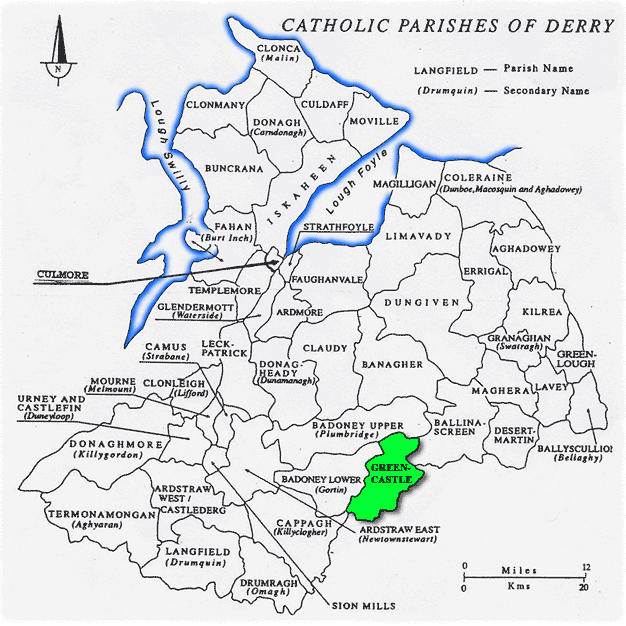 The Diocese of Derry consists of 53 parishes and includes almost all of County Derry, parts of County Tyrone and Donegal and a very small area across the River Bann in Co. Antrim.

Greencastle was originally part of Lower Badoney but in 1892 it became a separate parish. It is bounded to the south by Carrickmore and Killeenan parishes and to the east it touches Ballinacreen at the County Derry borders. It is one of the most elevated parishes in the Diocese with the lowest land around 500ft and houses located at up to 860ft. It is renowned for the tradition of of music and song and was one of the last Irish-speaking areas in the Sperrins.

The townland survey of Tyrone 1837-1839 shows Greencastle Chapel on the same site as today with the graveyard adjoining. There is an oral tradition which claims there was an earlier chapel on the opposite side of the road, the remains of which could have been seen up until the present car park was constructed. St. Patrick’s, Greencastle was extensively renovated in 1988, the work being commenced by Fr. Seamus Shields. St. Mary’s Church, Broughderg was opened in 1885 on ground that had been given to the parish by Daniel Conway. Prior to this, people in the parish were buried in Badoney graveyard, their remains being carried over the mountain via Casàn na gCorp. The outline of some of the paths and a stone on Glenlark Mountain where the coffins were rested can still be seen today. St. Mary’s was replaced by the Church of Our Lady of the Wayside, on a new site, in 1985.

Coneyglen School closed in 1961 and the schools at Cashel, Greencastle, Crock and Broughderg all closed in 1980. Our Lady of Lourdes School in Greencastle replaces these. Some primary pupils, who live at a distance from Greencastle, attend schools in neighbouring parishes.