Homily for Bishop Daly’s Memorial Mass
by Fr. Edward Gallagher PP
Thursday 11th August, 2016 in St. Patrick’s Church, Greencastle
So He went in to stay with them. Now while He was with them at the table, He took bread, said the blessing then he broke it, and handed it to them. And their eyes were opened and they recognised him, but He had vanished from their sight

We heard these words in today’s proclamation of Luke’s Gospel, describing that scene of the two disciples travelling to Emmaus and the Lord Jesus joining them. He consented to stay with them. They, then, recognised him in the “breaking of the bread.” This an appropriate gospel passage for us as we gather here this morning on the day of Bishop Daly’s funeral and burial in St. Eugene’s Cathedral in Derry.

We can say that the passage was in some way lived out by Bishop Daly during his time among us. The Bishop came to Derry from his native Beleek in Fermanagh as a young boy to board in St. Columb’s College just as the Second World War was ending in 1946 and was to spend most of the following 70 years studying and ministering in the city of Derry.

On the way, during that long journey, the Bishop instructed in the ways of the Lord those with whom he came to live and walk. But, it would have been in the “breaking of the bread,” – within the Eucharist, the Mass – that his way of life called for recognition. As has been mentioned during these days, Bishop Daly always considered it his great privilege to celebrate Mass. In the end it is the most important act that we do as priests of God.

However, life as a person of the Eucharist goes beyond the celebration of Mass. It goes to the imitation of Christ. It goes to allowing our lives to be in the hands of the Lord like bread that gets broken. Jesus continues to join us on our journey, often unrecognisable, except in our own brokenness. The priest is called to be a Christ acting IN PERSONA CHRISTI in both the mass and his ministry. And, so it is that we contemplate the Sacred Scriptures in the light of Bishop Edward Daly who, as an Alter Christus, another Christ, takes his leave from us. His memory will not leave us.

I am told that perhaps his first visit here to Greencastle came in the last week of December, 1973 when he came here to concelebrated the funeral mass of our former parish priest here Fr. Henry McFaul and it was remarked upon by other priests present that day that it was unusual to see him at a priests funeral so far from Derry, but perhaps he had already been given an inkling that within a few weeks he was going to be announced as the new Bishop of Derry in succession to Bishop Neil Farren. 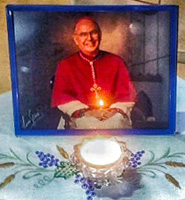 While we might recall today the many Masses that he celebrated here in Greencastle during Confirmation, Pastoral and other visits, including the Dedication of Our Lady of the Wayside in 1985 and the rededication of this our parish church of St Patrick’s which is recalled on the plaque in the lobby, it is in the eucharistic life that he was called to live and the brokenness that he accepted in all humility that we find his legacy. It takes a man of considerable humility to be an authentic person of the Eucharist. He had many crosses to bear in life- the death of his father just as he was about to be ordained to the priesthood, the events of Bloody Sunday in 1972, his several battles with cancer beginning back in 1977 when he had a cancerous kidney removed, then came the stroke in 1993 and the later battle with lung cancer and its spread and finally his fall at home last week in which he broke his hip and which precipitated his final decline until his death just after 9.00am on Monday morning. The previous day the priests of the city began to keep vigil along with the family and it was nice that when he died it was Bishop Francis Lagan who was taking his turn and was present at the time of death.

Describing a bishop, the current Directory for the Pastoral Ministry of Bishops says, among other things, “He (that is, the bishop) reveals the goodness, the loving care, the mercy, the gentleness and the authority of Christ…” Those characteristics Bishop Daly showed often and generously. Bishop Daly became bishop on the heels of the Second Vatican Council and the implementation of its various decrees and documents. It was something he applied his energies to with enthusiasm.

In the subsequent two decades of service, Bishop Daly proved to be one of the most intensely pastoral bishops in the history of the diocese and a gentle caretaker of the Church in Derry right through those very difficult years of the Troubles until just before the ceasefires of 1994. Those days were not easy for bishops or for anyone for that matter. They were times of transition and challenge; – perhaps, much more difficult than those of today. Nevertheless, Bishop Daly met them with faith, hope, gentleness, and humility.

Most of us are aware of Bishop Daly’s gentleness and humility. Those attributes can also be translated into kindness, which has often been called to mind during this past week. I think in particular of his 20 plus years as chaplain in the Foyle Hospice accompanying countless numbers of individuals and families through the difficult journey through the valley of darkness towards death. In the last analysis, it is the love that the Lord commands all of us to live – which can be taken advantage of and often was in the Bishop’s case. He tried to live out the words of his chosen episcopal motto. “Pasce oves meas”. “Feed my sheep”.

These brief meandering thoughts of mine, which I share with you, are meant to do two things – certainly, not to praise Bishop Daly. He would object to that. Rather, they are meant to elicit in us a sense of deep gratitude for the generous apostolic ministry of a gentle shepherd. In addition, they are meant to prompt us to do likewise, even though or, rather, especially when we become the bread that is broken so that the presence of the Lord can be revealed.

In recognition of all that, we have gathered in prayer as those who believe that the Lord has risen and is alive. We entrust this bishop and steward into God’s loving care, knowing that he will be welcomed into the place prepared for him as a faithful servant of the Kingdom.

And, we, we will now return from where we came much like the disciples from Emmaus to continue our journey of witness to the reality of Jesus Christ and his Church, the Assembly of Believers.

There is a Native American saying, which reminds us that we do not authentically know a person unless we first walk in his or her moccasins. None of us can actually do that. Nor can we thoroughly appreciate Bishop Daly’s contribution of self to this Diocesan Church. What we do know is that, for almost two decades since he retired as Bishop of Derry, we have been building upon the foundations that he had laid. Only God starts from scratch. The rest of us function on the shoulders of those who precede us. 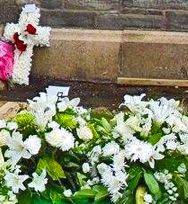 Permit me to conclude on a personal note. My family has particular reason to be thankful to Bishop Daly as he journeyed with us in my father’s dying days and weeks in Foyle hospice back in 1995. While it is of course a great privilege to be able to administer the sacraments to your own family members, especially the Anointing of the Sick, it really puts you out and front and I was thankful that Bishop Daly was there to step in when I needed a helping hand. It was Bishop Daly who around this time back in 1985 accepted my application to be a seminarian of this diocese and finally, as for many of you, he confirmed me in St. Eugene’s Cathedral back in May 1974. I will leave the final simple words to the man himself taken from his book ‘A TROUBLED SEE, Memoirs of a Derry Bishop’. At the end of his preface he wrote,

I am an enthusiastic and very happy priest. I have to admit however, that I was a somewhat reluctant bishop
PAGE TOP ▲ 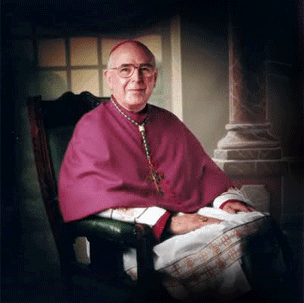 Those words will encourage me, as I walk in my own moccasins, in my own shoes on the journey of life